Ford Racing Technology’s Greg Specht said this week that the automaker is not panicking in the face of defections by Mark Martin, Dale Jarrett and Elliott Sadler to rival manufacturers, and has absolutely no plans to leave NASCAR. 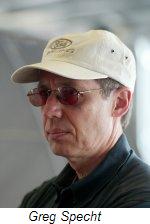 Fans of the Blue Oval have had little to cheer about lately, with FoMoCo placing only four drivers in the final Nextel Cup Top 20. Just four years ago, nine Ford drivers ended the season in the Top 20 in points. Meanwhile, rival Chevrolet extended its recent string of manufacturer's championships in 2007, and celebrated the 400th Nextel Cup victory for its legendary Monte Carlo nameplate. Since the beginning of NASCAR’s modern era in 1972, Chevrolet has earned 26 of 35 NASCAR manufacturers’ championships.

Ford’s Specht called the automaker’s 2006 struggles part of a natural ebb and flow of competitive fortune, and said NASCAR racing remains an important part of its heritage.

Specht said he has been assured by corporate management that Ford will remain a viable part of NASCAR, and that adequate funding will be allocated to keep the automaker competitive with Chevrolet, Dodge and Toyota. Ford CEO Edsel Ford made similar comments on MRN Radio two weeks ago at Homestead-Miami Speedway.
Posted by Dave Moody at 10:36 AM