Two of the NHRA's three Funny Car championship contenders will join us live today to talk about this weekend's season-ending "Auto Club NHRA Finals" in Pomona, California. Thirteen-time Powerade World Champion John Force and perennial title contender Ron Capps will appear in our second hour today, to talk about the season-long battle for the championship, the pressure of this weekend's race, and their mutual respect for one another. 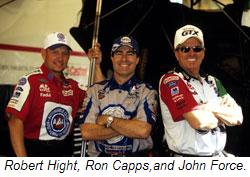 Force comes to Pomona with a 71-point edge over Capps and a 73-point advantage over teammate (and son-in-law) Robert Hight in his quest for a fourteenth NHRA World Championship. A year ago, Force and Capps faced a nearly identical situation, entering the season's final race in a razor close, three-man battle with eventual champion Gary "Wild Thing" Scelzi.