A New Series For Jack Roush

Last weekend at Homestead-Miami Speedway, NASCAR mega-team owner Jack Roush renewed his long-running harangue against NASCAR’s new Car Of Tomorrow, saying he would like to see more leeway in the rules, and more opportunity for teams to be creative in the way they construct their cars.

“I would have a rule book that said you come to the race track at the assigned time, you have four tires and you burn gasoline,” said Roush. “That would be about all I would require.” 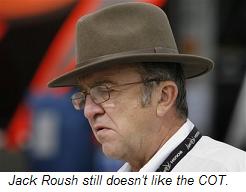 “I would pretty much `Run What You Brung,’ but (NASCAR is) determined to have this thing where it’s convenient for them to regulate it and officiate it even-handedly and fairly. To that end, they make every effort to take the racing out of all but just a few things.”

Roush decried the relatively low-tech state of NASCAR racing, saying, “There is very little innovation in the car today,” complaining that standardized body templates prevent him from custom-building cars to fit the idiosyncrasies of his drivers.

“If you look at a handful of drivers like the Roush organization has, one guy is really nervous when (the car is) loose…(while) other guys say, ‘I don’t care if it’s loose, just get me all the downforce that you can,’” said Roush. “The Car of Tomorrow is going to have an aero variance that’s much, much less than it is today, and there’s going to be a lot of people that won’t be able to drive those cars. Today, they can compensate or adjust the aero-match on the car to suit the preference of the driver.”

Instead of lowering the cost of racing, Roush said the COT will actually increase the cost of competition, since money-is-no-object owners like himself will spend whatever is necessary to get an advantage. “It’s forcing us to spend money on technology that we would rather not have to spend, in order to find an edge and suit the needs of the driver,” he said.

Clearly, Jack Roush is in the wrong league.

NASCAR -- with its stringent guidelines and devotion to easily policed, old-school technology – is not the place for a wide-open, "Run What You Brung" kind of guy like Jack. Maybe he should consider selling his multi-car operation (I hear DEI is shopping around) and going somewhere else, where the rules allow the kind of unfettered creativity he craves.

Formula One, perhaps.
Posted by Dave Moody at 9:20 AM