Montoya To Make Cup Debut at Homestead Next Weekend 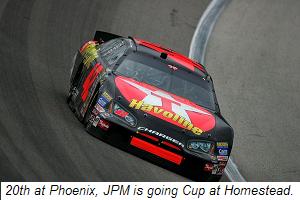 Sirius Speedway has learned that Chip Ganassi Racing with Felix Sabates will announce later this week that Juan Pablo Montoya will make his NASCAR Nextel Cup Series debut next weekend, in the season-finale at Homestead-Miami Speedway.

Chip Ganassi told the media today that he has confidence in Montoya's ability to run the race, but wants to make sure the proper infrastructure is in place before making the final call. "Before we do this, I want to be sure we can get him on and off pitroad effectively. We need to have a team in place to prepare and service the car well. This whole thing has happened pretty quickly, and the last thing I want to do is embarrass Juan and ourselves by moving too fast."

Sources tell Sirius Speedway that two options are currently under consideration for Montoya at Homestead. The first would have him behind the wheel of a new #30 Dodge, while the second would be to have him drive the #42 Texaco Havoline Dodge usually wheeled by Casey Mears, with Mears moving to the #30.

Montoya has made three NASCAR Busch Series starts in recent weeks, including a 20th place finish yesterday here at Phoenix that saw him run in the Top-12 for most of the day, before a pitstop miscue and a late spin dropped him to 20th at the finish. On one of his final pitstops, Montoya appeared to stop too close to the pit wall, causing his team to struggle changing left-side tires. He then suffered through a slolo spin in the first turn, followed by minor damage in an incident that sidelined fellow Open Wheel star Sam Hornish, Jr.

After the race, Montoya was less-than-impressed with the backmarkers in the Busch Series, saying, "It's tough passing these guys -- they seem like they don't see you, they just sort of play dumb.

"When you run up front, the guys run a lot cleaner, a lot smarter. The guys in the back are just too dumb. I'm trying to keep the car in one piece and its very hard, because, yes, I am a rookie -- but no, I am not a rookie. I have probably more experience (than anyone) in this grade. I've driven more things than anybody here. I am being smart, I am trying not to cause any wrecks or anything, but it's got to stop."

Ganassi is also expected to announce that the William Wrigley Jr. Co. -- makers of Wrigley's Spearmint Gum -- will serve as Montoya's primary sponsor for three Nextel Cup races next season, and as an associate backer on Montoya's #42 Texaco Havoline Dodge in the other 33 events.
Posted by Dave Moody at 11:29 AM