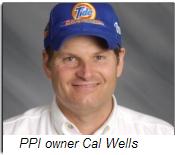 Sunday’s “Ford 400” at Homestead-Miami Speedway was likely the final ride for Cal Wells and his PPI Racing Team. Longtime sponsor Tide announced a few weeks ago that it will leave the team (and the sport) at the end of the season, and Wells has been unsuccessful in securing a new backer for his struggling Nextel Cup team. Sources close to the situation say Wells informed his employees that he will close the doors later this week, after a hoped-for sponsorship deal fell through.

Wells came to NASCAR from the CART Open Wheel series in 2000, amid considerable fanfare. He secured sponsorship from both McDonald's and Tide, who had previously backed popular veterans Bill Elliott and Ricky Rudd, and raised the financial bar in NASCAR racing almost immediately. He offered lucrative contracts to drivers, crewchiefs and crewmembers alike, raiding other teams for personnel and earning the ire of rival team owners.

Unfortunately, Wells learned that money alone does not guarantee success in NASCAR Nextel Cup racing. In his seven years of NASCAR competition, Wells went to Victory Lane only twice; both with driver Ricky Craven at the wheel. One of those wins was a truly memorable one, with Craven emerging victorious from a last-lap, fender-banging duel with Kurt Busch at venerable Darlington Raceway in March of 2002. But as a whole, Wells’ tenure as a NASCAR owner was unremarkable. His last Top-10 finish (an eighth) came courtesy of road-racing specialist Ron Fellows at Infineon Raceway in 2005, and this season, PPI Motorsports ended the year ranked a woeful 36th in points, with a season-best finish of 19th.

Kvapil announced last week that he will join Jack Roush's NASCAR Craftsman Truck Series team next season, arguably becoming the first driver ever to be promoted from Nextel Cup to Trucks. Kvapil pulled no punches in justifying the move, saying, “I can’t go through another season like the one we’ve had.” 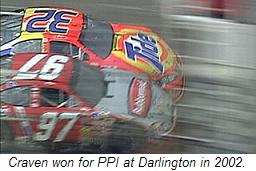 Cal Wells is a likeable guy who accepts much of the blame for the shortcomings of his team. Speaking to Sirius Speedway during preseason testing at Daytona International Speedway earlier this year, Wells said, “I have made a lot of mistakes. I made some bad personnel calls in the early years of this team, and I’m still paying for them today. This business is so competitive that once you get behind, it’s tough to catch up. Everyone is working at 110% capacity, and that doesn’t leave much room for anyone to gain ground.”

Sadly, Cal Wells and PPI proved incapable of catching up.

Next February, Wells and his bright orange #32 “Tide Ride” may scarcely be missed among all the multi-car teams and shiny new Toyotas clogging the garage area. But his absence is worth noting, if only for what it represents. Now, only Robby Gordon, BAM Racing and a rogue’s gallery of part-time backmarkers are left to carry the banner of NASCAR’s once-proud single-car teams.
Posted by Dave Moody at 9:54 AM