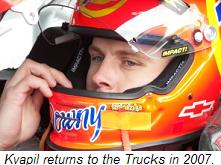 Travis Kvapil will announce later this week that he will return to the NASCAR Craftsman Truck Series next season, driving the No. 6 Ford for Roush Racing.

Kvapil has two races remaining on his one-year contract with PPI Motorsports, but team owner Cal Wells has been unable to land a sponsor to replace longtime backer Tide, prompting Kvapil to explore his options elsewhere. Appearing at a charity event last night in his native Winsconsin, Kvapil said, "Something should be happening within a couple days. All I can say right now is that this is the opportunity I've been hoping for my whole career. It's a chance to drive for a team that has a solid foundation."

Sirius Speedway has learned that Kvapil will replace Mark Martin in the #6 Ford F150, a truck that has won five times in just a dozen starts this season.

The 2003 NASCAR Craftsman Truck Series champion, Kvapil has five career Truck wins, but has struggled in two seasons of racing on the Nextel Cup circuit. He finished 33rd in points for Penske/Jasper Racing in 2005, before the No. 77 Kodak Dodge team shut down at season’s end. He then moved to PPI Motorsports this season, and currently ranks 36th in points with a best finish of 19th (three times). Of the PPI operation, Kvapil said, "We have a decently funded team, (but) I just don't want to go through the same thing I've been through this year."

In addition to steering the #6 Ford Truck, Kvapil may also drive a limited schedule of events in Nextel Cup and/or Busch Series action next season.

In other Truck Series news, Sirius Speedway has learned that Matt Crafton is the leading candidate to replace Kenny Wallace in the ppc Racing #22 Busch Series entry next season. Crafton, a native of Tulare, California, is currently 13th in NCTS points driving for ThorSport Racing, with four Top-Five and 10 Top-10 finishes. Wallace recently signed a contract with the Furniture Row Racing Nextel Cup team that will allow him to race on the Busch Series only with their permission.
Posted by Dave Moody at 11:57 AM