Team owner Robert Yates said yesterday that he will turn over the reins of his two-car Nextel Cup team to his son, Doug, at the end of the season. "Hopefully, I can quit and get in the rocking chair and watch Doug do what he's going to do for the next 20 years," said Yates. In a related story, Yates said Jack Roush’s soon-to-be-announced sale of 50% of his team to Boston Red Sox owner John Henry’s Fenway Sports Group will strengthen the Roush/Yates engine alliance. Yates will continue to own 50% of the program, with Roush and FSG splitting the other half evenly. 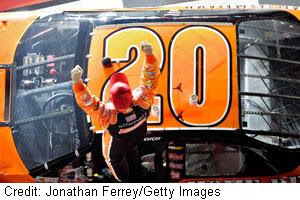 Smoke Takes Bud Shootout: Tony Stewart served fair notice last night that he is back with a vengeance in 2007, winning his third career Budweiser Shootout at Daytona International Speedway. The two-time NASCAR Nextel Cup Series champion passed leader Kyle Busch with an aggressive turn-two move with just eight laps to go, then held off upset-minded David Gilliland for the win as a number of cars crashed on their way to the checkered flag. Kurt Busch was third, followed by Jimmie Johnson and Kevin Harvick.

The final-lap crash came when Dale Earnhardt Jr. got into the back of Elliott Sadler’s Dodge, knocking Sadler into defending Bud Shootout champion Denny Hamlin and Kasey Kahne.

Those struggles continued what has already been a tough SpeedWeek in the Camry Camp. Bill Davis Racing teammates Dave Blaney and Mike Skinner have both been forced to pull engines from their mounts after experiencing problems, and during pre-qualifying inspection,NASCAR officials confiscated the intake manifold from Michael Waltrip’s NAPA Toyota. Sources say the offending part was immediately bagged and sent to NASCAR's Research and Development Center in Charlotte, NC, for further examination.

Crocker Luckless: Erin Crocker just can’t buy a break. The Evernham Motorsports driver became the first women in 17 years to qualify on the pole for the Daytona ARCA 200 earlier this week, but was once again the victim of someone else’s mistake in the race itself. Crocker ran strongly in the early going, but got spun from behind when the car in front of her either spun its tires or missed a shift on a mid-race restart. The incident cost her a lap, and she finished 20th, one lap down.

Outside polesitter Bobby Gerhart led 54 of 80 laps en route to a record fifth ARCA 200 triumph; his third in a row here at Daytona. 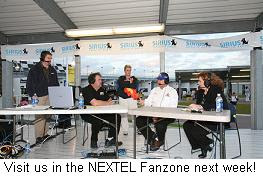 Broadcasting Live: Sirius Speedway will be broadcasting live from the NEXTEL Fanzone here at Daytona International Speedway on Wednesday, Thursday and Friday, as we continue the countdown to the 2007 Daytona 500. Dave, Suzy Q., and Ryan will broadcast from the top of the Turn Four Nextel Cup garage from 3-7 p.m. ET (weather permitting), and fans of the show are invited to come on out and say hello.
Posted by Dave Moody at 1:53 PM