Crewchief David Hyder has been put on an indefinite leave of absence by Michael Waltrip Racing. 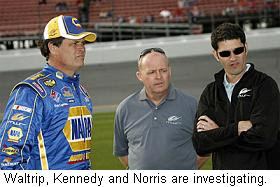 Hyder was suspended indefinitely by NASCAR last week, after an unidentified substance was found in the intake manifold of Waltrip’s NAPA Toyota. Team General Manager Ty Norris said Hyder will not be allowed back into the shop until his role in the controversy is determined, though he will continue to be paid.

There are published reports today that Hyder will be fired, but Norris said the team wants to know what happened before placing any blame. "We have to get to the bottom of it, and he's a huge part of it," said Norris. "I talked to him Saturday night for an hour. We went through the step-by-step process, trying to figure out anytime where something might have gotten in the fuel." 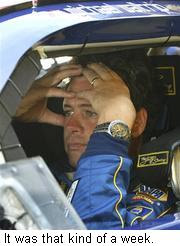 Norris said Vice President of Competition Bobby Kennedy will remain active with the organization, despite his own indefinite suspension by NASCAR. Another unidentified member of Waltip’s traveling team has also been given a leave of absence. Norris and Waltrip addressed the entire organization yesterday to emphasize a zero-tolerance policy on cheating, and said the team continues to cooperate with NASCAR’s investigation.

NASCAR officials have declined to name the mystery substance, with Vice President of Competition Robin Pemberton calling it, "nobody's business." Norris said he knows what the substance does, and said it was likely introduced in the fuel. 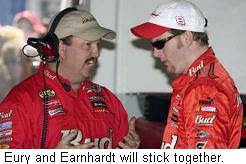 Tony Eury Jr. -- Earnhardt's crewchief and cousin – said Sunday that if Junior leaves, he will be right behind him. "When I decided to stay there and sign a long-term contract, I made it very specific that if 2007 comes and Dale Jr. decides to do something else, I'd like to have my options open," said Eury.

Eury said he hopes Earnhardt will remain with the team, adding he believes that to be the best decision for all parties. Earnhardt said recently that he wants majority ownership of DEI, a stance Eury supports.

"Junior should be running the company," he said. "That's what Dale Sr. built the company for, for those kids to have something later on in life."
Posted by Dave Moody at 9:05 AM