Climb Aboard The Shrubby Train! 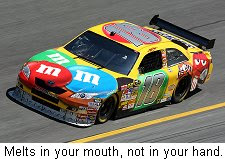 He is the NASCAR Sprint Cup Series point leader, with one pole and two-top five finishes in three starts this season. He steered his new Joe Gibbs Racing/M&Ms Toyota to an outstanding fourth-place finish at Daytona – after leading for much of the day – then finished fourth in California and 11th at Las Vegas.

On the NASCAR Nationwide Series, Busch is second in points after a pair of runner-up finishes at Daytona and Fontana. A crash in Las Vegas relegated him to a 31st-place showing there, but before the wreck, he was clearly one of the cars to beat. He will start on the pole this afternoon at Atlanta Motor Speedway, after snow forced cancellation of qualifying

He also leads the NASCAR Craftsman Truck Series standings, after posting his second consecutive series win in last night’s American Commercial Lines 200 at Atlanta. That victory followed a win two weeks ago in California, and a second-place finish in the season opener at Daytona.

Let’s do the math. In nine starts to date, Busch has seven top-five finishes, with an average finish of 6.4. He has led more laps than any other driver in NASCAR, and established himself as a legitimate contender to sweep all three major NASCAR championships, should he choose to make the attempt. 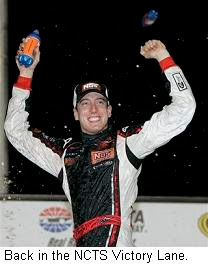 “I think the possibility is there,” said Busch of the possibility of adding a full Nationwide schedule to his full-time Sprint Cup slate. “But I'm not going to do whatever it takes to get practice in the Nationwide car. I'm going to worry about the Cup stuff and show up to race the Nationwide car." He has said that he will not run the entire Craftsman Truck Series schedule; apparently preferring to win two-thirds of his part-time starts instead.

In the past, his free-wheeling style – both on and off the racetrack – have made him an easy target for the grandstand boo-birds. That’s not likely to change overnight, but it’s definitely becoming more difficult to find a seat of the Busch Bandwagon lately. Fans and fellow competitors have begun to recognize a future NASCAR champion in the making, and the lines at his souvenir trailers are now five and six-deep. His ability to manhandle a less-than perfect racecar has been favorably compared to that of the late Tim Richmond; another notable renegade who took time to curry favor with NASCAR Nation. His ability to craft a memorable quote ranks him right up there with Tony Stewart and big brother Kurt on the list of media members’ favorite stops. 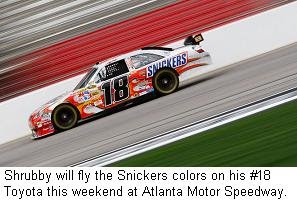 Much has been made of the off-season swap of Dale Earnhardt, Jr., for Busch at Hendrick Motorsports. The situation came down to much more than “who’s the better driver;” with contract status and marketability also major factors in Rick Hendrick’s decision to make the change. But Hendrick himself admitted that he expects to see Kyle Busch accepting a Sprint Cup championship or three in his career, and we expect Hendrick to be proven correct.

In short, the kid’s got it all, and Joe Gibbs must be feeling like the cat that caught the canary.

Love him or hate him – and there are still plenty of people on both sides of that fence -- Kyle Busch holds the hottest hand in NASCAR these days. And there are no signs of that changing anytime soon.
Posted by Dave Moody at 10:43 AM