Is The Writing On The Wall For New Hampshire's Second Cup Date?

If you’re a season ticket holder at New Hampshire Motor Speedway, now would be an appropriate time to begin worrying in earnest about your track’s annual, two-race slate of NASCAR Sprint Cup Series races. 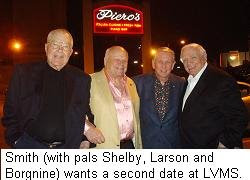 Speedway Motorsports Inc., CEO Bruton Smith sounded an ominous warning for New England race fans Sunday, rallying fan support for a second Cup date at Las Vegas Motor Speedway next season. Smith is a man of substantial means. He is rich enough to have spent $340-million for the Loudon, NH oval last fall; about $100m more than anyone else thought prudent. He travels in powerful circles, celebrating his 81st birthday in Las Vegas at an upscale Italian eatery with automotive icon Carroll Shelby, former Open Wheel great Mel Larson and film star Ernest Borgnine. In short, Bruton Smith is a man used to getting what he wants. And Sunday, he made it clear that he wants a second Sprint Cup Series race at Las Vegas Motor Speedway.

During pre-race ceremonies for the UAW/Dodge 400, Smith said, “If you want to see two races here next year, hold up two fingers for the world to see. Send a message loud and clear: we want TWO…TWO…TWO.” Fans quickly picked up the chant, apparently believing that they were lobbying NASCAR for a second race. However, NASCAR has repeatedly stated that it will not add anymore dates to the already overcrowded Cup schedule. They have also said that if Smith wants a second race in Las Vegas, all he has to do is transfer an event from one of his other tracks.

In short, the decision on a second race at LVMS belongs entirely to Bruton Smith, making Sunday’s “TWO…TWO…TWO” more than a bit puzzling. Smith has the power to make a second race at LVMS happen with little more than the stroke of the pen, and he knows it. Based on that fact, Sunday's chant-fest was little more than table-setting for what comes next; an announcement that due to overwhelming popular demand, Las Vegas Motor Speedway will host two races on the 2009 Sprint Cup schedule.

Our sources continue to say that the most likely scenario has New Hampshire losing its Opening Round slot in the 2009 Chase For The Championship, with that event moving to Texas Motor Speedway. Texas’ Chase date – inconveniently located on the opening weekend of deer hunting season in the Lone Star State – would then shift to Las Vegas.

There are other scenarios, of course. And the fact that northeast race fans have never failed to sell-out a Sprint Cup race at the Magic Mile (something fans in Texas, Atlanta and Charlotte cannot claim) is a selling point in favor of keeping two races in the Granite State.

Like it or not, two things are crystal clear at ths point. First, based on Smith's pre-race comments Sunday, there will be two races in Sin City next year. And second, another Speedway Motorsports, Inc. venue will lose a race to make it happen. That's the simple reality of the situation.

And if you're a loyal supporter of New Hampshire Motor Speedway, it's also cause to lose sleep at night.
Posted by Dave Moody at 11:32 AM