Toyota's White: It Was Intentional

The love affair between Jack Roush and Toyota continues.

The Roush-Fenway Racing co-owner has never been a fan of Toyota, once paying an employee who drove a Toyota passenger car in Yen. He criticized the Japanese automaker’s inclusion in the sport, saying they would sway the competitive balance by spending the competition under the table. 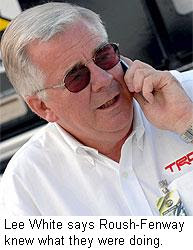 Roush-Fenway Racing President Geoff Smith insists that the oil tank cover came loose accidentally due to a bolt backing off during the race, and that it did not produce any performance advantage.
Posted by Dave Moody at 9:53 AM