Labonte May Fill The Void In Petty #45

Officials of Petty Enterprises Racing say they are not anxious to swap owner points between Bobby Labonte and Kyle Petty. But another Labonte – two-time Sprint Cup Series champion Terry Labonte – may be waiting in the wings to help.

Petty Enterprises Vice President Robbie Loomis said this week that obligations to sponsor General Mills make a Bobby-for-Kyle swap unlikely. However, he said, "We could call on Terry. He might be willing to help us out a little bit. He's got championship status like…Bill Elliott and Dale Jarrett, so that's an option for us. But ultimately, we'd like to leave Kyle as the driver of the car, and have him make the race."

Labonte confirmed that he may be willing to help out, but only on tracks that he enjoys, like road courses and short tracks.

“The only way I'd be interested…is if everybody's onboard with it," he said. "'I don't want (Kyle) to think I'm trying to take his job, because the last thing I want is his job. If I could help them, I would."

If he takes over the #45 Dodge, Labonte’s status as the 1996 Cup champion would give him precedence over Elliott, who won the crown in 1988. 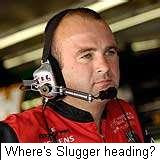 Labbe Out At BDR: A spokesman for Bill Davis Racing confirmed today that crewchief Slugger Labbe has left the team. Labbe had been working with the No. 27 Toyota and driver Jacques Villeneuve, before a lack of sponsorship sidelined the operation.

He has been rumored to be under consideration for positions at both Hall Of Fame and Red Bull Racing, but denied contact with either team yesterday. His resume includes crewchiefing stints at Dale Earnhardt Inc., MB2 and Ginn Racing, Robert Yates Racing and Evernham Motorsports. He won the 2003 Daytona 500 with driver Michael Waltrip.

Fitz said he will put his full effort into his #22 Supercuts Dodge, while Wallace jumps to the #28 Border Patrol Chevrolet for Jay Robinson Racing.

Sauter -- "It Stinks": Johnny Sauter says he understands why he was released by the Phoenix Racing Nationwide Series team, but that the move still hurts. 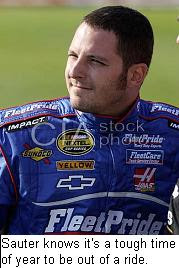 Sauter got his walking papers this week, despite ranking 17th in points for a team that is already on its third crewchief of the season. He said yesterday, “I understand that race teams have to do…what they have to do to improve their program. It’s a tough deal, I’m sure, and it’s a tough call to make. As far as me losing my job, it stinks.”

Sauter said he knows it will be difficult to find a ride at this point of the season, but is determined to fiind a competitive ride somewhere. In his words, “All you can do is call. All I’m asking for is to be competitive. You just want to run well. I want to be team player, and feel like I can make a difference.”

Phoenix Racing has not commented on the move, or annoounced a replacement driver.
Posted by Dave Moody at 10:00 AM