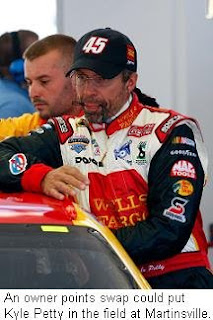 Petty Enterprises will decide this week whether to swap owners' points between Bobby Labonte and Kyle Petty, assuring Petty a spot in the field at Martinsville next weekend. Petty is currently 40th in owners’ points, while Labonte is 18th. Labonte would be guaranteed a position on the Martinsville grid as the 2000 Sprint Cup Series champion. Vice President of Operations Robbie Loomis said no decision has yet been made on whether to request the transfer, and that he might be comfortable with allowing Petty to attempt to qualify on speed at Martinsville.

Roush-Fenway Racing is also faced with a possible points-swap, with Jamie McMurray currently 36th in owner’s points, and former series champion Matt Kenseth in 11th. Roush has not commented on the possibility of making such a move.

Michael Waltrip Racing has succeeded in dodging the owners’ points bullet, at least for now. All three MWR cars are guaranteed starters at Martinsville, with Michael McDowell’s #00 Toyota ranked 27th in points, Waltrip in 30th and David Reutimann 34th. Sam Hornish, Jr. is the final guaranteed starter for Martinsville with a 35th-place standing in owners’ points, meaning that a much-discussed second swap with former champion Kurt Busch can wait for at least one more race. Busch still has five Past Champions Provisionals left to use.

Currently outside the Top-35 and on the “Go-Or-Go-Home” list for Martinsville are Jamie McMurray in 36th, Dave Blaney in 37th, Dario Franchitti, Regan Smith and Petty. 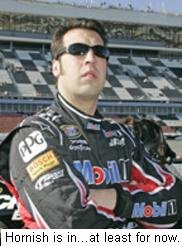 It’s one thing to swap points before the start of a season, so long as a team is forced to live with that decision for an entire year. But these midseason point swaps go against the spirit of NASCAR’s Top-35 rule. Deals like the one being discussed between Busch and Hornish – where drivers swap points before the season, then again after the schedule is partially complete -- are especially egregious, and allow team owners to exploit the system in a way that NASCAR almost certainly never intended.

If NASCAR chooses to leave this loophole open (and there are many who think they should not) teams should be forced to make an actual, physical change to correspond with the change in ownership.

Effective immediately, NASCAR should institute a new clause governing midseason point swaps. Rather than simply shuffling some inter-office paperwork, drivers wishing to swap points at mid-season should be forced to drive the car that is listed for that specific owner.

Simply put, require Hornish to steer the Miller Lite Dodge for the remainder of the season, with Kurt Busch inheriting the Mobil One car. Put Kyle Petty behind the wheel of the #43 Cheerios/Betty Crocker Dodge, with Labonte jumping to the #45.

That will cause a few headaches for sponsors and marketing departments, but it’s a small price to pay for a ploy that, in effect, gives drivers like Hornish a series of “free passes” to race at NASCAR’s highest level, without ever qualifying.
Posted by Dave Moody at 1:37 PM