Toyota Racing Development General Manager Lee White drew a sharp line in the sand this week, scoffing at Jack Roush’s assertion that an errant oil tank cover on Cark Edwards’ winning Office Depot Ford at Las Vegas Motor Speedway was due to nothing more sinister than a bolt that inadvertantly backed off. 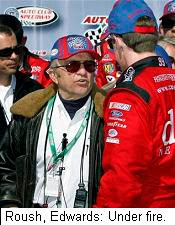 White said he believes the cover was intentionally allowed to come loose, resulting in approximately 170 extra pounds of downforce and reduced aerodynamic drag. In addition, White said videotape obtained during Sunday’s race shows a crewman pulling on Edwards’ right-rear fender to create a three-inch gap between the fender and filler panel; a gap White claims would produce an additional 70 pounds of downforce.

Roush reacted angrily to White’s comments, saying, “I'm going to treat Lee White and Toyota…like they were an ankle-biting Chihuahua, and be done with it.'' The Roush-Fenway co-owner also volunteered to take a lie detector test to prove that there was no intent to cheat.

Roush has found little support in the Sprint Cup garage, with a number of drivers and crewchiefs weighing-in on White’s side. Veteran Jeff Burton said, “Taking the oil tank lid off the oil tank is not something new. That's something that has gone on for a long time, particularly at Daytona and Talladega.”

A well-known Sprint Cup Series crewchief -- who spoke on the condition on anonymity -- confirmed that the trick has been well-known in the NASCAR garage for years. In his words, “We all did it for a long time, until NASCAR put a stop to it.” In addition, he said Edwards was “ratted out” by another team in Las Vegas Sunday, and that NASCAR officials “knew exactly what they were looking for” after the race.

Roush-Fenway President Geoff Smith continues to insist that the violation was unintentional, saying, “The bolt holding the lid in place failed…as a result of vibration harmonics generated by the car and the race track during the race.”

A number of drivers and crewchiefs say that assertion holds little water.

“One thing I have learned about these race cars is typically, things don't fall off," said Jeff Burton. "Crewmembers typically don't leave the a-frames loose, they typically don't leave brakes loose, the gauges don't fall out of them. We have highly trained mechanics that have rigorous checklists. I don't know if they did it on purpose or not, nor do I claim to. Mistakes do happen, though." 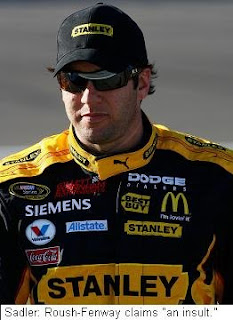 Dale Earnhardt Jr., who finished second to Edwards Sunday, said of Smith’s assertion, “That's ridiculous. That's comical. They should not allow him to make those kind of comments. They should have the crewchief get in there and say the honest answer and they'd be better off. Those guys are learning things and doing things. They were wild and crazy enough to try it. We got outran and outfoxed, not only behind the wheel but in the shop as well.”

Elliott Sadler went a step further, calling it “an insult to me as a racer, and an insult to everyone that works in that garage.”

It now appears unlikely that Roush-Fenway Racing will appeal their penalty to the National Stock Car Racing Commission. But the debate will almost certainly rage on.
Posted by Dave Moody at 9:41 AM