Allmendinger, Riggs In Running For #41 Ride

Sources close to the new Dale Earnhardt, Inc./Chip Ganassi Racing alliance say the decision on who drives their #41 car next season is down to two drivers; Scott Riggs and AJ Allmendinger. 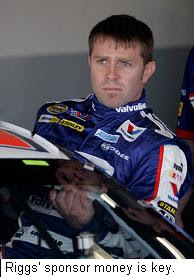 Riggs has sponsorship money from State Water Heaters and Hunt Brothers Pizza to bring to the deal, while Allmendinger has impressed with his on-track performance this season. If Riggs gets the nod, Ganassi Racing’s Target sponsorship will reportedly move to the #8 Chevrolet, to be driven next season by Aric Almirola.

Team principals were reportedly waiting to see the results of yesterday’s race before deciding who gets the ride. Both drivers had good days, with Allmendinger finishing 11th and Riggs 14th.

In a related story, Richard Childress said this weekend that a meeting is scheduled for tomorrow to finalize plans to bring Ganassi Racing into the Earnhardt-Childress Racing Engines program. He said he expected those talks to be successful, even though Chip Ganassi has expressed a desire to keep his own engine program going. Childress did not rule out the possibility of some of Ganassi's engine shop employees moving to ECR.
Posted by Dave Moody at 2:28 PM