NASCAR Must Be Doing Something Right 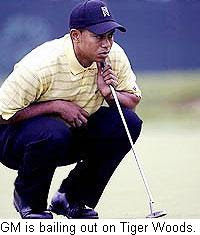 Chevrolet has also trimmed its spending in NASCAR recently, with cutbacks in event sponsorship, signage and support programs like pace cars and safety vehicles. But Chevrolet’s decision to continue supporting teams like Hendrick Motorsports, Richard Childress Racing, and the new Earnhardt-Ganassi and Stewart Haas Racing teams – to the tune of a reported $100 million per year – says a lot about the return GM brass is apparently seeing on their NASCAR sponsorship dollar. Clearly, General Motors believes it is getting more from its relationships with Jimmie Johnson, Jeff Gordon, Tony Stewart and Dale Earnhardt, Jr., than it is from its relationship with the man recognized as arguably the greatest golfer of all time.