Papers filed in the ongoing lawsuit between Kentucky Speedway, International Speedway Corporation and NASCAR reveal that ISC declined at least one offer to purchase the track, because it did not mesh with the sanctioning body’s expansion plans.

In a legal brief filed Tuesday, attorneys claim that former Kentucky Speedway owner Jerry Carroll attempted to sell the track to ISC beginning in 1999 for $186 million; far more than the $78.3 million rival Speedway Motorsports, Inc., paid for the track earlier this year. ISC declined the offer, saying that a race in that market “would not further NASCAR’s expansion goals.”

Attorneys also repeated their longstanding contention that as a private company, NASCAR has the right to choose where and when it races, saying NASCAR and ISC did not violate antitrust laws by denying a race to Kentucky Speedway. Final arguments have yet to be filed by either side, meaning that hearings will likely not begin until January of next year, at the earliest.

In an interesting aside, figures cited in this week’s filing claim that in 206, a NASCAR Sprint Cup Series race was worth $6.51 million to a track operator. 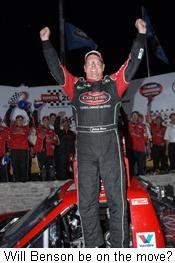 Spokespersons for Bill Davis Racing declined to comment on the story, which cited a source close to Benson. The team did announce yesterday that 19-year old Tayler Malsam will drive a fourth Toyota Tundra for them on the Truck Series next year.

Benson has made no announcement about his 2009 plans, but has hinted that retirement could be an option. The 1995 NASCAR Nationwide Series champion will join us Thursday on Sirius Speedway.

Hendrick Layoffs:The economic downturn has reached the doorstep of NASCAR’s top team, as Hendrick Motorsports underwent what is being termed "a modest round of layoffs" this week that included Jimmie Johnson's spotter, Stevie Reeves. Reeves confirmed Tuesday that he has been informed that he will not return to the #48 team next season, and has already been contacted by other teams about the 2009 campaign. Reeves will spot for Johnson in the final two races at Phoenix and Homestead-Miami Speedways.

And Finally: O'Reilly Auto Parts has signed an exclusive, multi-year agreement to become the Official Auto Parts Retailer of NASCAR. The agreement allows for O'Reilly Auto Parts to utilize NASCAR marks and marketing programs in its stores and related media. O'Reilly will become a contingency sponsor, and provide season-ending awards in both the NASCAR Sprint Cup Series and NASCAR Camping World Truck Series. The auto parts chain sponsored six NASCAR races this season, including Sprint Cup and Nationwide Series events at Texas and Phoenix.
Posted by Dave Moody at 1:44 PM