Yeley: HOF-JGR Alliance Not What It Appears

Former Hall Of Fame Racing driver JJ Yeley spoke out about his tenure with the team this week, claiming that Hall Of Fame’s chassis and engine alliance with Joe Gibbs Racing was not what it appeared to be, and that he was unfairly targeted as the cause of the team’s poor performance. 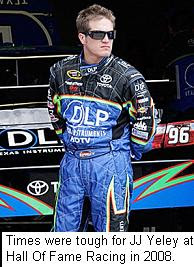 HOF owners Jeffrey Moorad and Tom Garfinkel inherited the Gibbs alliance when they purchased the operation from former owners Roger Staubach and Troy Aikman, and joined JGR in a switch from Chevrolet to Toyota during the off-season. In an interview with the Arizona Republic this week, Yeley claims there was no exchange of technical information between Hall Of Fame and Joe Gibbs Racing, and that he did not receive the same equipment as JGR drivers Tony Stewart, Kyle Busch and Denny Hamlin.

"There were promises of big-name crewchiefs and a lot of testing, (but) these were things we never really got to do," said Yeley. “(The owners) started hanging the blame and pressure on me. I hope now they realize it wasn't the driver.” He said Moorad and Garfinkel “thought the relationship (they) had with Joe Gibbs Racing was better than it was. Because they thought they had a better product than they really did, it almost made them blind that they had a problem."

When Yeley failed to qualify for four of the season’s first 21 races, sponsor DLP HDTV exercised a clause in its contract that reduced its payments to the team. Yeley was released in August, shortly after the #96 team fell out of the Top-35 in owners’ points.

Garfinkel insists that Yeley’s release was related to performance, not sponsorship. He admitted, however, that the relationship between HOF and JGR was not what he hoped it would be.

"We inherited a contract that didn't have a lot of flexibility to it,” he said. “It was more of a customer-supplier relationship than an alliance. We were hopeful we could evolve the relationship in that direction, and that didn't take place." He said there will be no alliance with Gibbs next season, and that the team’s #96 Toyota is not fully sponsored for 2009.

Yeley recently hired a marketing firm to help him secure a sponsorship that he says could put him in a Dale Earnhardt Inc. Chevrolet next season. That effort includes an eBay listing offering a full season of NASCAR Sprint Cup racing, in exchange for $12 million in sponsorship.
Posted by Dave Moody at 1:55 PM