The long-speculated partnership between Dale Earnhardt, Inc. and Chip Ganassi Racing with Felix Sabates now appears to be imminent. Sources close to the situation tell Sirius Speedway that while the deal cannot technically be classified as a merger, an announcement is expected within the next few days regarding a competitive and economic partnership between the two teams. 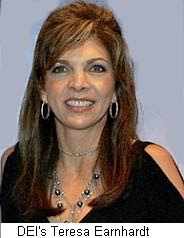 The deal will allow DEI and Ganassi to field at least three cars next season with drivers Martin Truex, Jr., Juan Pablo Montoya and Aric Almirola. A fourth car is possible, dependant on sponsorship. There is no word on potential manufacturer affiliations, with DEI currently aligned with Chevrolet, and Ganassi in the Dodge camp.

BB&T’s burgundy and gold paint scheme will be on the #33 Impala for 10 point-counting races –- beginning with the March 8th event at Atlanta Motor Speedway -- and the Sprint Cup All-Star Race at Lowe’s Motor Speedway in May. BB&T will serve as a major associate sponsor for the remaining 26 races, with Cheerios and Hamburger Helper as primary backers.
Posted by Dave Moody at 11:45 AM