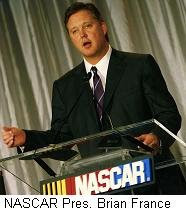 NASCAR Chairman Brian France said Sunday that the sanctioning body will remain a viable entity, with or without the continued support of General Motors, Ford, Dodge and Toyota. France said the struggling economy and plummeting auto sales could conceivably force one or more of the automakers to reduce support to race teams, or even withdraw from the sport entirely. But he stressed that even if that happens, the sport will survive.

He revealed that he and NASCAR President Mike Helton have met with high-ranking executives of all four manufacturers, and that each of them agreed that the sport remains an important and effective marketing tool. "Each (of them) went out of their way to tell me that while there are pullbacks and cuts to meet these challenges, the last thing would be to abandon something that works so well," he said.

France also expressed confidence that NASCAR will have full, 43-car fields next season.
Posted by Dave Moody at 10:43 AM