ROCKINGHAM, North Carolina - Dave Moody, host of "SIRIUS Speedway" on SIRIUS NASCAR Radio 128 and lead turn announcer for MRN's NASCAR race broadcasts, has been named as the official starter of the Polar Bear 150 at Rockingham Speedway. Moody will wave the green flag at the New Year's Day event, officially starting the first race of 2010. 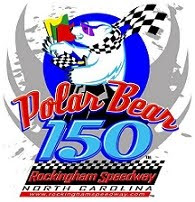 The 2nd Annual Polar Bear 150, which will be held at noon January 1, will be a chance for race fans to celebrate the beginning of the 2010 racing season with competitive racing by the Frank Kimmel Street Stock Nationals Series. The entry list, which already has 61 registrants, includes a combination of NASCAR drivers and crew members, drivers from the ARCA Racing Series presented by RE/MAX and Menards, and previous Rockingham winners from the Frank Kimmel Street Stock Nationals Series.

Speedway owner, Andy Hillenburg personally chose Moody to give the green for the second annual running of the race. Moody, who has been a regular on MRN Radio since 1998, is looking forward to performing his official starter duties. "The Polar Bear 150 is grassroots racing at its best, and I'm proud to be a part of it," said Moody. "I just hope I don't drop the flag."

"Dave will make an awesome flag-waver for the Polar Bear 150," said Mike Calinoff, CEO of Activ8 Communications, the agency handling the PR for the event. "His arm should be in great shape from years of moving food from his plate to his mouth. Andy could not have made a better choice."

European-style qualifying will be held at 10:00 AM on Friday, January 1, 2010, and the green flag will drop at 12:00 PM. A driver autograph session, which will include the starting lineup as well as Moody, Firestone Indy Lights driver Leilani Münter, and some all-star surprises, will take place at the frontstretch fence between the conclusion of qualifying and driver introductions.

Grandstand admission for Thursday's activities is free, and tickets for Friday are $15 in advance and $20 at the gate. Kids (12 and under) are $5. Military discounts and public suite options are both available as well. Tickets can be purchased at www.rockinghamspeedway.com or by calling (910) 205-8800.

Be sure to follow Rockingham Speedway's official Twitter site, www.twitter.com/RockinghamSpeed, which will be running special contests and ticket giveaways for the duration of 2009. More information about Rockingham Speedway and the Polar Bear 150 can be found by visiting www.rockinghamspeedway.com.
Posted by Dave Moody at 3:18 PM