Kyle Busch Motorsports To Field Two Trucks In 2010; Third Entry For Benson In The Works

Kyle Busch confirmed today that he will field a pair of Camping World Truck Series Toyotas next season under the banner of his new Kyle Busch Motorsports team. 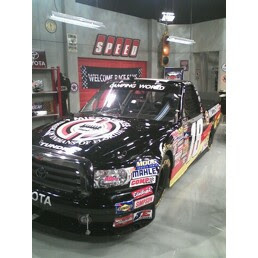 Busch will drive a partial schedule of events in a #18 Tundra sponsored by Miccosukee Resorts, while sophomore driver Tayler Malsam will drive a #56 Toyota with sponsorship from Talking Rain and ActivWater. Former Camping World East and West Series driver Brian Ickler will drive the #18 Miccosukee Toyota in the races that Busch does not run.

KBM will utilize chassis, parts, technology and some personel from Joe Gibbs Racing. The team will operate out of the former Xpress Motorsports building for now, until Busch's new, state-of-the-art facility in Mooresville, NC is completed early next year. 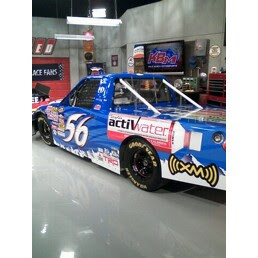 There was no announcement today of a ride for veteran Johnny Benson, but Benson was in attendance at the press conference, and Busch said he hopes to field a third entry for him this season if sponsorship can be found.

"We've had a lot of great discussions with folks, but nothing has progressed tot he point where we could announce it today," said Busch. "It means a lot to have Johnny as part of this team, and we hope to be able to run him in a full championship effort this season."

Sirius Speedway reported earlier this week that talks are underway with Exide Batteries and at least one other sponsor about backing Benson.
Posted by Dave Moody at 2:09 PM