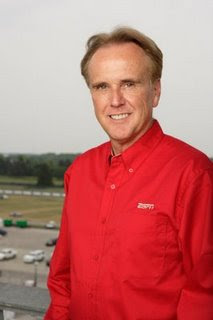 Marty Reid will replace Dr. Jerry Punch alongside booth mates Dale Jarrett and Andy Petree for ESPN’s 2010 NASCAR coverage, calling the action for all 17 of the networks NASCAR Sprint Cup races as well as many of their NASCAR Nationwide Series telecasts. Punch will return to pit road for the network’s Sprint Cup and Nationwide Series broadcasts next season, after anchoring the network’s broadcasts for the past three years.

ESPN Executive Vice President of Studio and Event Production Norby Williamson explained the move, saying, “We play to the strengths of our announcers, and Marty’s strength is calling the tactical aspects of the race while deferring to the analysts.”

In addition to his new NASCAR role, Reid will continue as lead booth announcer for ESPN’s five-race IndyCar Series schedule, showcased by the Indianapolis 500.
Posted by Dave Moody at 4:55 PM