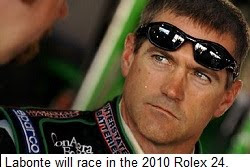 The 2000 Cup champion said he plans to compete for the team in the Rolex 24 at Daytona; his fourth career start in the legendary sportscar event. "Kevin (Buckler) really didn't have to talk me into it," said Labonte yesterday. "I've always been a big fan of the Rolex 24 since I started racing, and I raced a go-kart on the same track when I was 15. He didn't have to twist my arm."

Wallace Still Searching: Despite statements to the contrary, it appears that Kenny Wallace may not be as well-off in terms of 2010 sponsorship as initially believed.

Wallace told Sirius Speedway recently that he will run full-time for the Jay Robinson Racing #28 NASCAR Nationwide Series team again next season, that negotiations were progressing for the US Border Patrol to return as a major sponsor, and that a new "high end" backer was set to be announced for an additional eight races.

Today, the team released a statement saying that they do not have a deal for 2010, and that there are no contracts signed. The statement said, “We would love to have Kenny back for the full schedule. However, this will not happen unless sponsorship can be found. At this point, we believe at least eight races could be possible. Beyond that, all options are open."

In other Wallace news, Chrissy Wallace said this week that she hopes to run at least the first five races of the NASCAR Camping World Truck Series season, and is working on sponsorship to make that happen.

Wallace also said there is a chance that she could run a pair of Nationwide events, as well, pending sponsorship. She was slated to run the full Truck schedule a year ago, but a planned sponsor withdrew just before the season, forcing her to the sidelines for all but a couple of races.
Posted by Dave Moody at 2:06 PM