Ambrose To RPM #9 Ford Next Season 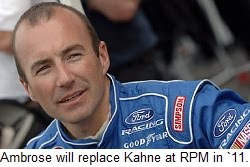 Sirius NASCAR Radio’s Sirius Speedway with Dave Moody has learned that Marcos Ambrose will replace Kasey Kahne in the #9 Ford at Richard Petty Motorsports next season.

Ambrose announced earlier today that he will leave JTG Daugherty Racing at the end of the 2010 campaign, saying, "After five years, I personally felt it was time for a change. We haven’t had year we wanted to have, and I felt stale in what we were doing. I don’t want to impede JTG’s progress. I want to get out of their way and let them transition to their next driver with plenty of time left this year.”

Ambrose said he has no “Plan B” in place for 2011 and could even return to his native Australia if another Sprint Cup opportunity does not surface. Highly placed sources tell Sirius Speedway that a deal with RPM is “95 percent done,” though there is no definitive word on who might sponsor the effort. 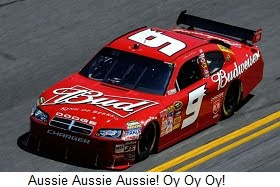 Ford Racing Marketing Manager Tim Duerr declined to comment specifically on the report today, but said the automaker has longstanding ties with Ambrose. “Marcos started with Ford and Ford brought him to NASCAR,” said Duerr. “He bleeds Ford blue, and we would love to see him back in a Ford next season. I don’t think that Marcos has a signed Sprint Cup ride for next season at present. It all depends on him, a sponsor and a team putting something together, but I am optimistic that we will see Marcos back in a Ford next season.”

A spokesman for Richard Petty Motorsports declined to comment today, calling the report “speculation.”
Posted by Dave Moody at 1:24 PM