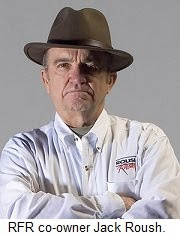 Roush was piloting his own Hawker Beechcraft Premier jet to an Experimental Aircraft Association show, was landing his when the accident occurred. Eyewitness Roger Florkiewicz told local television station WFRV-TV 5, “The right wing tip hit the grass to the right of the runway. Immediately after, the nose hit and it cartwheeled tail over nose, and then skidded to a stop." 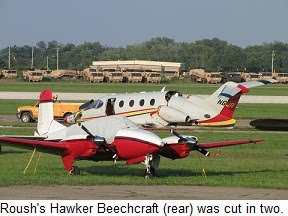 A bloodied Roush exited the heavily damaged aircraft under his own power, as did his passenger, secretary Brenda Strickland. Both were transported to a local hospital. Roush is listed in serious but stable condition, while Strickland reportedly suffered non-life threatening injuries. Roush Fenway Racing President Geoff Smith told the Associated Press that Roush’s injuries could require him to undergo surgery, but attending physician Dr. Kevin Wasco said those injuries were also non-life threatening.

The National Transportation Safety Board is investigating the incident, Roush’s second serious crash in the last eight years. In 2002, he was critically injured after crashing an experimental plane into a pond near Troy, Ala., on his 60th birthday. Retired Marine Larry Hicks witnessed that crash, paddled a boat to the scene and repeatedly dove through a layer of spilled jet fuel to pull Roush from the submerged wreckage and perform lifesaving CPR.

You can view CNN's video of Roush and Strickland exiting the aircraft by clicking HERE. Warning, the video is somewhat graphic and not suitable for some viewers.
Posted by Dave Moody at 9:34 AM