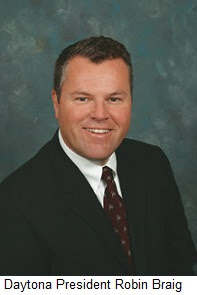 Daytona International Speedway President Robin Braig said today that he has “no intention" of swapping the track’s traditional July 4 NASCAR Sprint Cup Series date for the final race of each season.

There has been speculation recently that NASCAR Chairman Brian France will move the season finales for the Sprint Cup, Nationwide and Camping World Truck Series from Homestead-Miami Speedway to either Daytona or Las Vegas Motor Speedway, beginning in 2011. Braig, however, told Sirius NASCAR Radio that he is happy with the track’s traditional “Coke Zero 400” in July and is not interested in changing dates.

Homestead-Miami Speedway has a long-term sponsorship contract with Ford Motor Company to host its annual "Ford Championship Weekend," but that contract is reportedly contingent on the track hosting the final races of the season for all three of NASCAR's national series.
Posted by Dave Moody at 1:13 PM