Tony Stewart said last week that Stewart Haas Racing has no plans for a third NASCAR Sprint Cup team in 2011. There has been rampant speculation that SHR could be home for Kasey Kahne next season, filling the one-year gap between Kahne’s departure from Richard Petty Motorsports and his 2012 debut with Hendrick Motorsports. But Stewart said there was “probably a zero percent chance we'll expand to a third team for next year,” adding that the team is still seeking a sponsor to replace Old Spice, and that there are unsponsored races on Ryan Newman’s car, as well.

“We're talking to a lot of great people (and) there's a lot of good opportunities out there,” he said. “It's just a matter of finding a package that works for somebody.” He said Stewart Haas Racing could ramp up to three – or even four – cars very quickly, but not without having the proper funding in place.

With SHR apparently out of the running, where will Kahne end up in 2011? Rumors continue to circulate through the Sprint Cup garage that Rick Hendrick has offered Mark Martin options to vacate the seat in the #5 Chevrolet a year early for another ride, allowing Kahne to drive the car next season. Martin has repeatedly denied those reports, saying he intends to fulfill the balance of his contract with HMS. 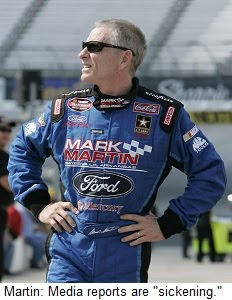 “I had to quit following the sport because it kinda made me sick,” said Martin in an interview with NASCAR Race Hub scheduled to air tonight. “The media didn’t understand, didn’t get it and couldn’t seem to deliver the message correctly. They only delivered the message they wanted to deliver, which was sensationalized. It was disgusting.”

Martin’s Business Manager, Benny Ertel, called the reports “aggravating,” saying his driver has grown tired of answering the same questions, week after week. “It’s the same thing, over and over again,” he said. “We walk into the media center and someone immediately raises their hand and asks about where Mark will be racing next season. Mark has answered the question a thousand times and it’s always the same answer. `I will be driving the #5 Chevrolet for Hendrick Motorsports next season.’ That’s as simple as it is, but some reporters just don’t listen.”

“Randy Pemberton went on Sirius NASCAR Radio the other day and said Mark will be driving for Red Bull next season,” said Ertel. “There’s not a shred of truth to that statement, and he never bothered to ask Mark, Rick Hendrick or anyone else about it. If he had asked, he would have been told -- in no uncertain terms -- that it was a load of hooey.

“I don’t know what’s so difficult to understand,” said Ertel. “Mark Martin will drive the #5 Chevrolet for Hendrick Motorsports next season. Period.” 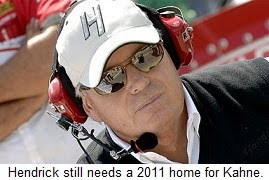 Sources with Hendrick Motorsports also denied reports of Martin’s departure today, and vowed that the #5 team will not allow the constant media speculation to become a distraction.

There is a rumor born every minute in the NASCAR Sprint Cup Series garage, and the media has every right to investigate and report on each and every one of them. It seems clear, however, that Martin intends to finish out his contract with Hendrick Motorsports by driving the #5 Chevrolet next season. With that said, it seems that Kahne will only drive for Hendrick next season if Martin is forced out of the ride against his wishes. Rick Hendrick has been a team owner in NASCAR since 1984, and has never shown a propensity for that sort of cold-blooded backstabbing.

At age 30, Kasey Kahne is the future of Hendrick Motorsports. Martin, at the ripe old age of 51, is not. But the Batesville, Arkansas native is still a valuable part of the team’s present, and he deserves better than
Posted by Dave Moody at 12:54 PM