Ambrose: "I Was Just Trying To Stand Up For Myself" 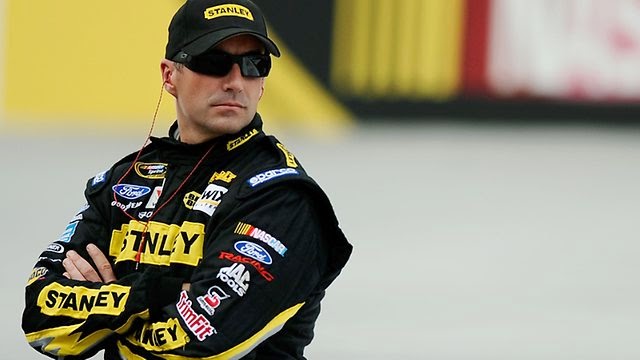 Marcos Ambrose has kept a low profile since his post-race dustup with Casey Mears Saturday night at Richmond International Raceway. The Richard Petty Motorsports driver was fined $25,000 by NASCAR and placed on probation until May 28 for his role in the fracas, which saw him land a stiff right hook to Mears’ eye.
Ambrose spoke publicly for the first time about the incident today at Charlotte Motor Speedway, calling the altercation “quite impromptu.
“I was walking past (Mears’) car after he’d finished the race,” Ambrose recalled. “I was actually heading over to have a chat with David Gilliland, just to say, `we’re all good’ after we got into each other a couple of times. Some words were said and I was confused why Casey was so annoyed at me.
“Once he put his hands on me and started pushing me around, I was just trying to stand up for myself and my country and my family and my reputation. I threw a punch… to get him out of the way and let him know that I didn’t respect him not giving me my space. 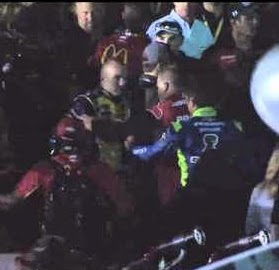 “A wiser man would have walked away a little bit earlier and not got himself in that situation,” admitted Ambrose. “I could tell it was not going well and I should have (walked away). We spoke for maybe a minute and a half before he started shoving me around, and I should have walked away a lot sooner. Next time, I might scamper into the race hauler or back to the plane and have a sleep on things.
”But I don’t apologize for my actions,” he said. “I was just standing up for myself and my team and my family; letting people know that you can’t get in my private space like that and expect not to have any consequences.”
Ambrose said he and Mears have spoken “more than once” since the incident, and “I honestly believe we’ll enjoy having a beer with each other. I think we have a mutual respect for each other. I like Casey a lot.  I didn’t have any beef with him after the race, but emotions just got out of hand. We both recognize that if we had our time (to cool off), it wouldn’t happen again. But now it has (and) you can’t take back what has happened.
“I’m not carrying anything forward.  He has to decide what he wants to do, but if we get ourselves in a pub somewhere, I’d buy him a beer no problem.”
Ambrose also denied media reports that he had been struck by one of Mears’ crewmembers during the fracas, saying, “I did not get punched. I was able to duck and weave and get out of trouble. I haven’t seen the (TV) footage, so I’m not even sure it was a swing. I know there was aggression by the people out there, and I’ve got no problem with it. I really don’t. Casey’s team was standing up behind Casey and my team stands up behind me. That’s just what we do.”
Ambrose said high emotions are a normal part of the sport, even when they lead to an occasional bout of fisticuffs.
“Adrenaline is part of what we do,” he explained. “It was an emotional race. A lot of drivers got into each other and there was a lot of action up and down the grid. I think you (saw) the passion that drivers have and the commitment we have to try to win these races.


“That passion got out of hand,” Ambrose said. “It got out of control pretty quick.  It was a beef between myself and Casey.  Unfortunately, it got put on national TV and three-and-a-half million people saw it.”
Posted by Dave Moody at 11:42 AM