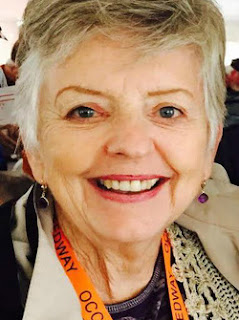 
Allison and her husband, NASCAR Hall of Famer Bobby Allison, were married for 55 years, shouldering more sadness and heartbreak than most couples could endure in a hundred lifetimes. Bobby claimed 84 checkered flags in NASCAR’s top division – still third-best on the all-time list -- before his career came to a shattering end in June of 1988 at Pocono Raceway. An exploding tire sent his Buick spinning in Pocono’s high-speed Tunnel Turn, where he was hit in the door by journeyman Jocko Maggiacomo. The track’s safety team used the "Jaws of Life" to extricate the unconscious Allison from his battered machine, and he was airlifted to the Lehigh Valley Hospital, where he lingered in a coma for weeks. Doctors put a steel rod in Allison's shattered left leg and opened his skull to relieve swelling on the brain; battling to save his life.
Two weeks after the accident, Bobby still had not spoken a word, and while the coma eventually lifted, long months of rehabilitation lay ahead.
"For two solid months, I couldn't add two and two," recalls Allison today. "I was conscious, but I had no idea who was who or where I was or what year it was. I sat and cried, like a two-year old. The world was really mixed up to me. I was mad that they let me live."
Judy was by his side through it all; sitting vigil at his bedside, cheering the triumphs – as she always had -- and minimizing the failures.
She seemed indestructible in those days, displaying a rock-solid stoicism that served her well in the dark days of Bobby’s recovery, and in the even-darker days to come.
In August of 1992, just as she and Bobby had begun to right themselves, youngest son Clifford Allison died in a NASCAR Busch Series practice crash at Michigan International Speedway, pinwheeling driver-side first into a concrete retaining wall and dying en route to the hospital. Once again, Bobby and Judy braced themselves against fate, stumbling through the unfathomable grief as best they could. 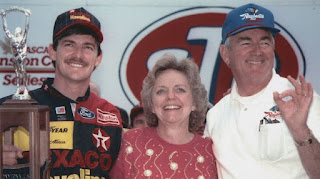 Then, just 11 months later, came the final blow. Eldest son Davey – a NASCAR superstar cut from his father’s mold -- died in a helicopter crash at Talladega Superspeedway. Tragedy sent the Allison family reeling once again, as Bobby and Judy grasped to understand what they could ever have done to deserve such heartbreak.


Burying two sons – and Bobby’s own career – was too much for even the towering Allisons to bear. Finally overwhelmed by grief, Bobby and Judy drifted apart, eventually divorcing. They spoke little, if at all, for a very long time, as each attempted to chart their own course through the hurt, making sense of the loss in their own private way.


Their estrangement was not to last, however. And ironically, it took death to repair what death had torn asunder.


In May of 2000, Adam Petty died in a horrifying practice crash at New Hampshire Motor Speedway. Like Davey Allison, Adam was the heir-apparent to one of NASCAR’s greatest family dynasties. Bobby and Judy were together that day – or at least in the same place -- attending the wedding of Davey's widow, Liz, in Nashville. As news broke of Adam’s crash, Judy Allison knew that the time for silence had passed.


She approached her ex-husband, saying, “the Pettys need our help.” They quickly agreed to make the eight-hour drive to Adam’s North Carolina funeral together, and as the miles clicked past, a remarkable reconciliation occurred. No one knows what was said during that drive; what wounds were closed and apologies made. But at the end of it all, Bobby and Judy Allison were together again. 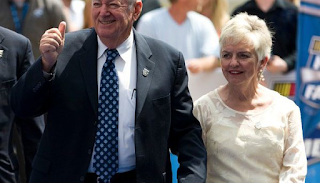 
The Allisons were rarely apart in recent years. Reunited in marriage, they were once again “Bobby and Judy;” a single entity, instead of two individuals. They had weathered the storm and found their way back to safe harbor, or so it seemed.


In recent months, word came of Judy’s latest battle; a struggle with breast cancer. The diagnosis was serious, but not terminal. With proper treatment, her prognosis was encouraging, and late last month, she quietly underwent surgery. Post-operative complications proved too much to overcome, however, and Bobby, daughters Bonnie and Carrie, grandson Robbie, brother-in-law Donnie and Donnie’s wife, Pat found themselves saying their final goodbyes to a woman that they – and so many of us – loved dearly.


NASCAR issued a statement on Judy's passing, calling her “the matriarch of a cornerstone NASCAR family (who) provided the foundation for the careers of a legendary husband and two sons who both lost their lives entirely too soon. Her love extended well beyond her own family, as many in the NASCAR family leaned upon Judy for support and compassion during many difficult times. We are deeply saddened by the loss of a true friend, and a woman who has given much to our sport."


Bobby Allison will continue on, as he always has, wrapped in the loving embrace of a community that is struggling once again to accept the harsh realities of life. The Allison Family will chart a new course, as they always do, moving forward without the compass that guided them so well, for so long, through so many troubled seas.