Them Dudleys Don't Know What
They've Gotten Themselves Into ! 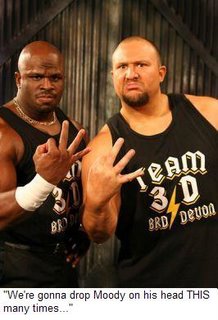 It's official! Sirius Speedway host Dave "Mad Dog" Moody will serve as one of the guest Lumberjacks when Jeff Hammond and Hermie Sadler team-up with Bubba Ray and DeVon Dudley to take on Jeff Jarrett, Americas Most Wanted, and "Showtime" Eric Young in an eight-man Lumberjack Match as part of the TNA Wrestling card on Saturday night in Martinsville, Virginia.

Dave will join Kyle Petty, Elliott Sadler, Scott Riggs, Michael Waltrip, and other NASCAR personalities in ensuring that none of the contestants escape the ring intact. We are relieved to report that he will perform his duties in street clothes, avoiding the unsettling possibility of seeing your favorite motorsports radio host in tights.

Moody commented on his new role, saying, "I know I'm supposed to be there in suppport of Jeff and Hermie. But if I get a chance, I might just bust Hammond in the lip for the fun of it. He's a good friend, but he's just too pretty. Somebody's gotta mess him up a little."

Moody also laid out his foolproof strategy for the event, saying, "If I see either of the 3-D boys coming my way, I'm heading for the exit. I know my limitations, and I have no desire to be thrown through a folding table!"

If you're in the area, check out the action Saturday night, at the old Lowes building across from the speedway. Doors open at 5:00 p.m. -- after the Craftsman Truck Series race -- with bell time set for 7:00 p.m. After the wrestling, country music star Don Cox will perform. TNA Wrestling is also offering a $5.00 discount for anyone displaying a Martinsville Speedway ticket stub, or a NASCAR license.