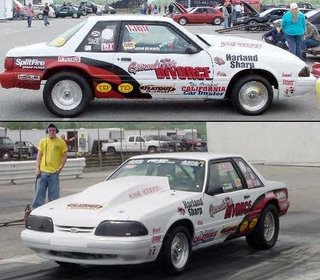 Listener John Hummel -- aka "Johnny in NJ" -- sends along this picture of his "Grounds For Divorce" drag car. John has followed drag racing since the age of eight, and bought his first racer -- a 1974 Duster -- with the help of his father, right out of High School.

He has won more races and honors than we could possibly list here, and is ridiculously active in a number of charity efforts, as well. Attaboy John, and we'll wear the T-shirts proudly!
Posted by Dave Moody at 1:11 PM