Knaus: I Have No Regrets 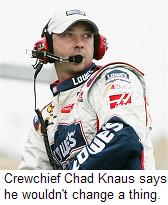 Chad Knaus says his Speedweek suspension from NASCAR was painful for both him and his team, but that he has no regrets. In a candid conversation with SPEED’s Wendy Venturini last weekend, Knaus talked openly about working in the gray area of the NASCAR rulebook, and his penchant for getting caught on the wrong side of the rules.

“Some people may agree and some people may disagree," said Knaus. "If it’s written in black and white, and you do something that’s not right, that is cheating. But if you go out there and find something that’s not in that rulebook -- and it doesn’t fall under direct or specific instructions in the rulebook -- I think that’s open area. It’s game on."

Knaus admitted that his Hendrick Motorsports team was aggressive in exploiting what they considered "gray areas" in the rules, but that their approach changed after he was sent home from Daytoona International Speedway in February.

"I’m not going to lie," said Knaus. "We’ve pulled back a little bit, to try to always conform to the spirit of the rule, not just the letter of the law. We’re always looking and trying to find an advantage, if it’s not in the rulebook.

"I think Daytona was pretty much the straw that broke the camel’s back. When we got caught at Daytona, (NASCAR) finally said, ‘look kid, you’re in trouble. We’re going to put you in the corner for awhile.’ I think it probably was deserved to a degree, and it’s probably helped me to a degree.”

Knaus said he has no regrets, even though he was not able to take part in Johnson’s Daytona 500 victory celebration.

“I think it’s gotten me to where I’m at today,” he said. “I’m not saying it wasn’t painful. There have been a lot of trying times, there’s no doubt about it. But I don’t regret anything I’ve ever done. Would I have done some things a little different? Maybe. But there’s nothing I would take back. Everything I have done has changed me and made me a better person, and a better leader. It’s also given me more respect in the garage, being able to bounce back from stuff like that.”