Sadler To Drive #19 Dodge This Weekend 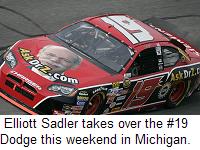 Sirius Speedway confirmed this morning that Elliott Sadler will take over the No. 19 Dodge for Evernham Motorsports, beginning this weekend at Michigan. An anonymous source close to the situation told me today that Sadler received his official release from Robert Yates Racing at 9:00 last night, clearing the way for him to replace Jeremy Mayfield this weekend.

In fact, Sadler is testing an Evernham Dodge at Kentucky Speedway today.

Kasey Kahne inadvertantly let the cat out of the bag last night, telling a group of reporters, “The 19 hasn’t performed at all this year, and actually has been bad at most of the tracks. They’re out of the top-35 in points, so Ray is changing some things around there. I think Elliott Sadler is going to be in the car this weekend. It’s going to be good.”
Posted by Dave Moody at 10:20 AM