What’s next, Santa Claus getting busted for DUI?

None of that would be nearly as shocking as hearing Dale Earnhardt, Jr. get booed – BOOED -- by fans at Michigan International Raceway Saturday, after punting Carl Edwards out of the lead within sight of the checkered flag in the NASCAR Busch Series CARFAX 200. 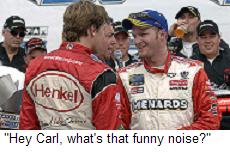 Earnhardt jacked-up the rear of Edwards’ Ford with a lap and a half remaining Saturday, sending Edwards spinning out of contention, and nearly taking third-place runner Robby Gordon with him. Earnhardt took the checkered and yellow flags together, but not until after Edwards had expressed his feelings by parking briefly in Earnhardt's pit stall, then returning to the track to rumple the side of Earnhardt's Chevrolet.

As Earnhardt wheeled his bright red Menards Chevy to Victory Lane, it became apparent that this was not going to be your average Dale Earnhardt, Jr., post-race celebration. Instead of the tidal wave of adoration that usually greets his every move, NASCAR’s favorite son stood in Victory Lane at MIS awash in catcalls, as fans expressed their unhappiness with his late-race tactics. Edwards showed up for a brief chat, as well, and while neither gent appeared inclined to fisticuffs, there was clearly no exchange of dinner invitations, either.

"I didn't mean to spin him out,” said Earnhardt, appearing puzzled by the tsunami of disapproval pouring from the grandstands. “I don't go around wrecking people. I wouldn't have waited two years to get back at him for wrecking me in Atlanta in 2004 pretty much the same way. We got a run off that corner, and Carl just got sideways and he wasn't in the gas. I guess he’s pretty mad at me, but there wasn't much I could do."

Edwards summarized the incident differently, saying simply, "He wrecked me off Turn Two. I just wanted to make sure he knew I was mad that he wrecked me. It's racing."

Of Edwards’ retaliatory sideswipe, Earnhardt said, "I had my hand out the window. He could have taken my hand off. But he didn't. That was just rude."

In the aftermath of Saturday’s race, some have suggested that a sea change may be underway in NASCAR’s “Most Popular Driver” Derby; with fans beginning to abandon Earnhardt in favor of Edwards’ strapping, square-jawed, six-pack abbed, back-flipping, All-American appeal.

Maybe. But I doubt it.

Remember, they booed Junior’s old man once, after he “rattled Terry Labonte’s cage” on the final lap at Bristol in August of 1999. And while they might have hated `Big E’ for a minute or two, by the time the next Sunday rolled around, he was back atop his perch as the greatest driver ever to strap on a stock car. It’ll be that way for Junior, too.

I must admit, though, that it was interesting to see NASCAR’s Court of Public Opinion hand down such an unexpected verdict, just once.

Kind of makes you wonder what might be next.
Posted by Dave Moody at 1:08 PM