Listener Dan Babcock sent along a photo of the Street Stock he races at Upstate New York's Fulton, Five Mile Point and Penn Can Speedways. He says a new job and "as much racing as possible" have prevented him from listening as much this summer as he would like; the ONLY excuse we are willing to accept! 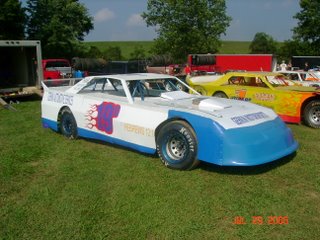 Longtime listener Dave in Indiana writes, "After an eight year lay off, I returned to the track this week with my new car. I will be racing at Brownstown and Lincoln Park, both in Indiana. We run what is known as Indiana Super stocks, which sometimes in the past were known as Limited Late Models. I run a pretty common combination of 406 chevy on alcohol."

Looking good, guys! Send a shot of your personal racer to speedway@sirius-radio.com, and we'll post it for the Road Dogs to enjoy!
Posted by Dave Moody at 9:16 AM