Another Sponsor Snit For RCR

Richard Childress continues to hope for an agreement to maintain the sponsorship on his Jeff Burton-driven #31 Nextel Cup Chevrolet, after current sponsor Cingular Wireless is rebranded as AT&T later this season. Now, Childress has a second sponsor conflict to deal with; this one pitting Shell Oil Company – new co-sponsors of Kevin Harvick’s Daytona 500-winning Shell/Pennzoil Chevrolet – against Sunoco, the Official Fuel Supplier of NASCAR. 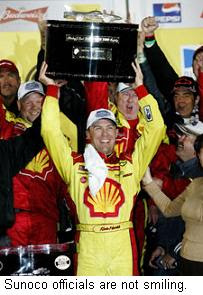 During SpeedWeeks at Daytona International Speedway, Sunoco officials complained bitterly about the Shell-Pennzoil branding on Harvick's uniform and helmet, saying their status as the Official Fuel of NASCAR precludes involvement by other fuel suppliers. Shell-Pennzoil sidestepped that restriction by agreeing to promote only their automotive lubricants – instead of gasoline – on Harvick’s car, but Sunoco officials contended that the distinction was murky, at best. After a number of complaints following Harvick’s NASCAR Busch Series win on Saturday – a win that saw him appear in Victory Lane wearing his Shell-Pennzoil firesuit when an AutoZone-logoed suit could not be finished in time -- NASCAR reportedly asked Harvick to wear a jacket over his uniform during driver introductions leading up to the Daytona 500, 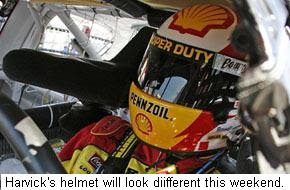 He agreed, but in-car footage during the race included a number of the Shell logos prominently displayed in the car, and on Harvick’s helmet and uniform. It should be noted, however, that directly below the main logo on Harvick’s helmet were the words “Super Duty;” a direct reference to Shell’s line of heavy duty lubricants. Despite that distinction, Sunoco officials were less than pleased when newspapers across the country featured Victory Lane photos of Harvick, complete with prominent Shell branding.

Sources now say that changes will be made in time for this weekend’s race at California Speedway. Harvick’s helmet will reportedly be repainted and his driving uniform reworked to include smaller, less-conspicuous Shell logos.

Sunoco is in the fifth year of a 10-year contract to serve as official fuel supplier for NASCAR’s Nextel Cup, Busch and Craftsman Truck Series, an agreement spokesman Ramsey Poston said the sanctioning body takes seriously. "In exchange for providing a quality product for all three series, Sunoco was granted exclusivity in the fuel category at the track," said Poston said this week. "We're always trying to work with our sponsors and teams to navigate through any challenges, especially in the automotive lubricant category, which is closely aligned with fuel."
Posted by Dave Moody at 11:49 AM