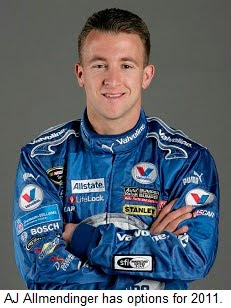 A.J. Allmendinger told Sirius NASCAR Radio's Sirius Speedway with Dave Moody Friday that he hopes to make a decision on where he will race next season within the next 30 days.
"I've had some great talks with the people at Richard Petty Motorsports," said Allmendinger. "I have also had some great talks with other teams. I can't tell you right now how it's all going to turn out, But I hope to have it all wrapped up by the middle or end of July."
Unconfirmed reports have the former Champ Car star in negotiation with Richard Childress Racing, among others, with RPM highly motivated to try and re-sign him to a multi-year contract. Allmendinger and teammates Elliott Sadler and Paul Menard are in the final years of their respective deals, and Kasey Kahne has already announced plans to race elsewhere in 2011 and beyond.
Posted by Dave Moody at 6:02 PM