Reiser Likely To Return As Kenseth's Crewchief Next Season 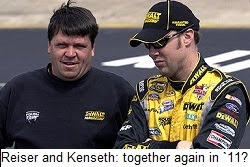 Team owner Jack Roush replaced Todd Parrott with veteran Jimmy Fennig last week, the second change of the season for the #17 team. “Matt and I shared a concern that we weren't getting the optimum number of changes in the garage (during practice) based on the plan and the preparation and the execution of the pre-race activities," explained Roush, adding that after an encouraging start to the season, “we kind of had a breakdown in team communication and the effectiveness… of getting ready for the race. I don't know if Matt stopped talking to (Parrott) or I stopped talking to him or what happened.”

Kenseth’s fifth crewchief since 2007, Fennig said last week that he expects to remain atop the pit box for the remainder of the 2010 campaign. However, sources tell Sirius Speedway that there is “a very strong possibility” that RFR General Manager Robbie Reiser will return to the post in 2011. “Robbie wants to come back,” said one source on condition of anonymity, “but he’s doing such a good job as GM that Jack can’t justify making a move right now. Next season, don’t be surprised to see Reiser back on the pit box, with Robbie Loomis succeeding him as General Manager.”

Kenseth admitted that consideration is being given to bringing Reiser back as crewchief, saying, "He probably would have filled in for the rest of the year (and tried) to do both, but there just are not enough hours in a day.”
Posted by Dave Moody at 12:58 PM