Driver Travis Kvapil and owner Doug Yates have been penalized with the loss of 150 driver and 150 owner points, which drops the team outside the Top-35 in owner points and will require them to qualify on time this weekend at Michigan International Speedway.

The team released a statement today, saying, “Front Row Motorsports supports NASCAR in its efforts to enforce competition rules and to maintain integrity throughout the sport. Therefore, Front Row accepts that NASCAR must penalize the team for a rules infraction regarding valve stem caps on the No. 38 car at Pocono Raceway on June 6. 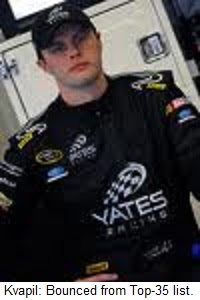 Team owner Bob Jenkins said, "It was not our intent to put unapproved valve stem caps on our car at Pocono, a track where such a maneuver would clearly not provide any advantage. We are conducting our own internal investigation to determine how those parts got into our inventory and onto our car last weekend. While we recognize we have to pay for our mistake, this was an unintentional, isolated incident,” adding that he will appeal the penalty to the National Stock Car Racing Commission.

All three Front Row Motorsports cars will compete this weekend at Michigan International Speedway.
Posted by Dave Moody at 2:14 PM