Stenhouse Out Of Roush #6 Nationwide Ford For Michigan? 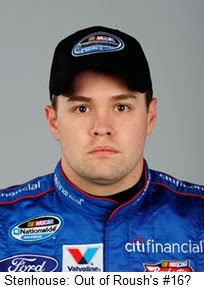 Sirius NASCAR Radio’s Sirius Speedway with Dave Moody has learned that Ricky Stenhouse, Jr., may not drive the #6 Roush Fenway Racing Nationwide Series Ford this weekend at Kentucky Speedway, and could be demoted to a part-time schedule or removed from the ride entirely.

Stenhouse failed to qualify for last weekend’s race at Nashville Superspeedway, dropping to 25th place in the Nationwide championship standings. He has only one Top-10 finish this season, with an average starting position of 13.6 and an average finish of 28.5.

Team owner Jack Roush made no mention of a driver change in a NASCAR video teleconference Tuesday afternoon, but sources close to the team say an official announcement is forthcoming that Stenhouse will be replaced by Brian Ickler at Kentucky this weekend, and perhaps beyond.

The move is be the latest in what has been a tumultuous season for RFR, with rookie Colin Braun demoted to part-time status after a series of early season crashes, including one with Stenhouse. Crewchief Eddie Pardue was fired last week after members of the #16 Nationwide Series team were involved in an incident at a Daytona Beach, Fla. strip club while testing at Daytona International Speedway.

Following a rain delay that postponed the start of the race, NASCAR officials observed two soft tires on the rear of Kvapil’s car and prevented him from rolling back onto the track for the start of the race. Closer examination of those tire and wheel assemblies revealed illegal bleeder valves, which purge excess air pressure from the tires as it accumulates under race conditions.

If confirmed, the team will likely face a major NASCAR penalty -- possibly the biggest in the history of the sport -- since tires are considered to be one of the sanctioning body's “Holy Trinity" of untouchable items, along with engines and fuel. Expect a penalty announcement from NASCAR later today.
Posted by Dave Moody at 2:07 PM