Refusing To Start And Park, Labonte Back On The Open Market

Bobby Labonte says he understands why TRG Motorsports chose to start and park its #71 Sprint Cup Series Chevrolet in three of the last five races.

He simply doesn’t want to be part of it. 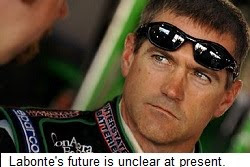 The 2000 Sprint Cup Series champion severed ties with TRG Wednesday, saying, “I just don’t want to do the start-and-park thing.” While acknowledging “it’s tough out there for a lot of people,” Labonte said he has no stomach for showing up at the racetrack with no intention of racing.

“I thought we could grow into a lot of things,” said Labonte of his partnership with TRG owner Kevin Buckler. “It just didn’t quite work out like we anticipated.” Buckler signed Labonte last November, a move seen as a major coup for a team entering only its second season of Sprint Cup competition. He hoped Labonte’s star power would enable him to sign a full-time sponsor, and that cars and technology from Richard Childress Racing and a pit crew rented from Stewart-Haas Racing would make them competitive on the racetrack.

Neither proved to be the case.

The team has struggled to find sponsorship and failed to record a Top-20 finish this season. “These (Sprint Cup teams) are the best of the best,” explained Labonte. “(They) have four teams or six teams or more, and when you add it all up, there are 28 of those. When you’re 29th, you’re next in that line. We weren’t 29th all the time. On a bad day it was 35th, and on a good day it could be 20th.

“We didn’t have a teammate to lean on,” he said. “If we had a teammate and… more funding to get more technology into the race team, that would hopefully enhance the deal. But it takes a lot of money to run this series.”

In the end, the prospect of running a few token laps each week before retiring to the garage was more than Labonte’s competitive nature could stand. “I felt like I needed to find different opportunities that were going to allow me to race,” he said. “That’s what we were supposed to do to start with, and what we were doing up until (recently).”

The 21-time Cup winner will drive for Robby Gordon Motorsports this weekend in New Hampshire, before strapping in for Phoenix Racing owner James Finch at both Daytona and Chicagoland. Gordon has spoken in broad terms about possibly fielding a second RGM Toyota for Labonte in the Brickyard 400, as well, but beyond that, there are no concrete plans.

For now, Labonte will continue ride-hunting. He said his focus remains on finding a quality Sprint Cup drive, but admitted that he would consider a competitive Nationwide or even Camping World Truck Series opportunity. When he takes the green flag this weekend, Labonte will make his 599th career Sprint Cup start and his 597th in a row. That consecutive start streak is a source of pride for the 46-year old Labonte, and while he hopes to continue as a full-time racer for another season or three, he’ll quit altogether before he’ll start and park.

Nobody –- not even Labonte himself -– knows how many green flags remain to be waved in his Hall Of Fame-caliber career. For now, the Corpus Christi, Texas, native will concentrate on the immediate future, letting next season take care of itself. “We’ve just got to concentrate on what we’re doing right now,” he said. “It would be nice to not have to wait (to know what we’re doing next year, but you just make the best of what you have.”
Posted by Dave Moody at 1:32 PM