Bayne Lands With Roush Fenway For Remainder of 2010 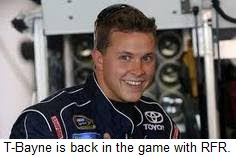 Bayne was released by Diamond-Waltrip Racing earlier this week after the team was unable to fulfill a contractual obligation by guaranteeing him a full-time seat for the 2011 season. Chad Norris will serve as crewchief for the effort. Bayne will reportedly drive the remainder of the season for Roush Fenway, and a team spokesperson said talks are currently underway concerning the 2011 season.

“We are pleased to be able to sign a driver of both Trevor’s caliber and character,” said Jack Roush today. “Trevor has exhibited a distinctive ability to run fast, up front and compete side by side with veteran drivers in a relatively short amount of time. We feel that he possesses all of the tools necessary to grow into a top-level driver and we look forward to working with him to hone his skills as we move forward down the road.”
Posted by Dave Moody at 2:13 PM