COMMENTARY: Smith Steps Over The Line With "North Cuba" Remark

Speedway Motorsports Inc. Chairman Bruton Smith took another verbal shot at Homestead-Miami Speedway this weekend, saying the South Florida oval is "not the proper place for the Sprint Cup Series to end the Chase for the Championship” and referring to the track as "North Cuba."

Smith told reporters at Kentucky Speedway Saturday that his Las Vegas Motor Speedway is the proper place for NASCAR to end its season, and he subsequently refused to retract a “North Cuba” characterization that many in the South Florida community find patently offensive. “I was just speaking the truth,” said Smith yesterday. “I was actually complimenting them. It was based on location, so I was just… being kind to the location. That’s what it was.”

Now a disclaimer, in the interest of full disclosure. Sirius Speedway is produced by MRN Radio, which is a division of International Speedway Corporation. ISC is Smith’s major competitor among speedway operators and owns Homestead-Miami Speedway. ISC also pays my paycheck, meaning that – ostensibly at least -- I could be viewed as having a dog in this fight. If you choose to disregard my views on this subject as being biased, you are certainly entitled to do so.

I have the utmost respect for Bruton Smith. His years at the helm of SMI have produced a string of showplace speedways from coast to coast, and his efforts have played a major role in making NASCAR what it is today. Unfortunately, his propensity to shoot from the lip with no regard for the consequences has also damaged the sport from time to time.

Smith has a right to his opinion, and he is free to express it. However, I cannot recall another track operator criticizing the competition the way Smith consistently trash-talks Homestead-Miami Speedway. His recent comments go beyond mere professional rivalry. They are personal and hateful in nature, damaging Homestead-Miami Speedway, its community and the sport as a whole, for no apparent reason. 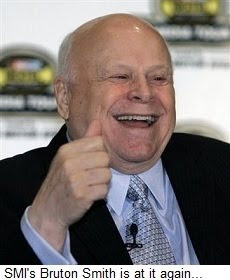 Bruton Smith knows what he wants, and he has never been one to compromise. When faced with a difference of opinion, the SMI Chairman generally reacts with all the subtlety of a bulldozer, plowing his way through the opposition using any methods at his disposal. Smith has been around long enough to understand the value of public opinion, and he knows from experience that if he says something frequently enough – and loud enough -- people will eventually begin to believe it.

That’s why he stood before a group of reporters recently and claimed, “The media wants the final race of the season in Las Vegas.” The media -– like NASCAR fans in general -- is deeply divided on the topic, and Smith knows it. He also knows that when his comments hit the newspapers, large numbers of NASCAR fans would accept them as gospel truth.

That’s also why Smith stands on the frontstretch at Las Vegas Motor Speedway each season exhorting fans to “raise up your hands and tell NASCAR you want two races here next year,” despite knowing the decision to being a second race to Vegas is wholly his, and not NASCAR’s.

Smith is not the eccentric uncle in rose-colored glasses he often portrays himself to be. He understands that Miami is not “North Cuba,” and he is able to differentiate between a thriving, energetic South Florida community and the backward, economically desolate communist state less than 250 miles to its south. In the end, the SMI Chairman is saying whatever it takes to cast Homestead-Miami Speedway and its community in a negative light, for his own personal gain.

One can only imagine the hubbub that would ensue if Smith's counterpart -- ISC's Lesa France Kennedy -- were to chastise Smith and former New Hampshire Motor Speedway owner Bob Bahre for stealing races from longtime NASCAR fans at North Wilkesboro Speedway a decade or two ago, and moving one of those races to "North Mexico:" Texas Motor Speedway. The response would be swift and indignant, as it should be. Why, then, does Smith get a free pass on his comments?

At worst, they are borderline racist in nature. At best, his comments are needlessly insulting to a speedway, a fan base and an area that have worked hard to make Ford Championship Weekend a success.

That is unfortunate, to say the least.
Posted by Dave Moody at 2:45 PM