Currently in its third year, Johnson’s "Helmet of Hope" program presented by Samsung selects and partners with charities focused on kids. In addition to the $10,000 cash award, the Racing Awareness logo will appear on Johnson's helmet at Auto Club Speedway in California on October 10. The program is also making an additional $20,000 available to one of its 2010 grant recipients, with the winning charity selected in an on-line voting process.

One vote per person may be cast each day at www.helmetofhope.org, with voting beginning today at 3 PM Eastern Time and continuing through Wednesday September 29, at 5:00 PT ET. The winning charity will be announced Friday October 1, 2010. 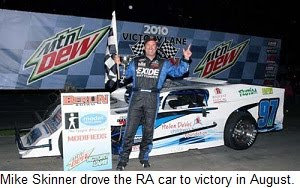 The Racing Awareness team was formed earlier this year to build a modified race car to compete at the Berlin (MI) Raceway, with all winnings donated to charity. NASCAR Sprint Cup Series driver AJ Allmendinger believed in the effort so strongly that he drove the car to Victory Lane on June 15 in front of a huge crowd. Former NASCAR Camping World Truck Series champion Mike Skinner did the same on August 28.

“Your vote could be worth $20,000,” said Striegle. “Please vote for RacingAwareness.com and help the Helen DeVos Children’s Hospital to receive an additional $20,000 from the Samsung Helmet of Hope program.”

Racing Awareness’ goal for the year is to raise $25,000 for donation to HDVCHF in December. With the "Helmet of Hope" gift of $10,000, the team has already raised more than $21,000. In addition to its on-track efforts, Racing Awareness also will also host a charity golf tournament on Monday, September 20 at Thousand Oaks Golf Club in Grand Rapids, MI.
Posted by Dave Moody at 12:50 PM