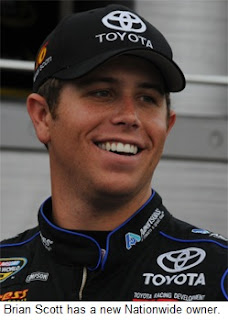 “I’ll be going to Dover this weekend to race for a new owner,” said Scott. “Steve Turner is the new owner of the team. I spoke to him last week and he talked about how much he wanted me to win the Nationwide Rookie of the Year title. He seems like a really honest, down-to-earth, no-nonsense kind of guy, and I’m looking forward to racing for him.”

Scott said he has had no conversations about plans for next season, but that he hopes to sit down with Turner again this weekend. Sources say an official announcement of Braun Racing’s sale to Turner Motorsports is expected later this week.
Posted by Dave Moody at 5:02 PM