Rusty "Tired Of Jacking Around," Interested In Fielding Third Car In 2011

Rusty Wallace told Sirius NASCAR Radio’s Sirius Speedway with Dave Moody today that he is “tired of jacking around, running outside the Top-10," and that he had to make personnel changes to boost the performance of his two-var NASCAR Nationwide Series team.

"We’ve got the parts and pieces we need to run up front and win races, but the mix of personalities just hasn’t been right to get it done," he said. "I’m going to do whatever it takes to make that happen.” 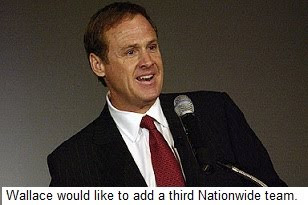 He said new General Manager Larry Carter will also serve as crewchief for Brendan Gaughan and the #62 South Point Resort and Casino Toyota for the remainder of this season, replacing Brad Parrott, who was released earlier this week. “It’s an interim deal,” said Wallace. “Larry will be on Brendan’s pit box for the final eight races of this season and we’ll hire someone full-time for next season, unless Larry decides he wants to keep doing both jobs.”

Wallace also said the team could add a third Nationwide Series entry in time for next season. “We have the people, parts, people and resources to do it,” he said. “I’d like to do it if everything comes together (in terms of sponsorship), so we’ll see. It could definitely happen.” He said both Stephen Wallace and Brendan Gaughan will return to the RWR lineup next season.
Posted by Dave Moody at 3:34 PM