Verizon Out As Allgaier's Nationwide Sponsor 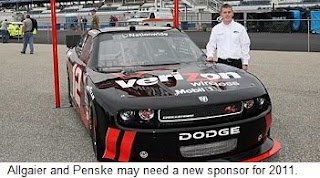 Sources tell Sirius NASCAR Radio's Sirius Speedway with Dave Moody that Verizon will not return to Penske Racing as sponsors of Justin Allgaier’s NASCAR Nationwide Series Dodges in 2011 and that Allgaier has been told he is free to seek employment with other teams next season. Allgaier is currently the top Nationwide-only driver in the standings, ranking fourth in championship points behind Brad Keselowski, Carl Edwards and Kyle Busch. Verizon will reportedly remain with Penske Racing next season, increasing its level of involvement with the team’s IndyCar program.

“It’s true that they’re evaluating their NASCAR investment right now,” said Penske Racing Vice President of Marketing and Communications Jonathan Gibson, "and it's true that they may increase their involvement with our IndyCar program."

Gibson said the team is talking with other companies about potentially replacing Verizon next season, adding, “Our intent to continue with two Nationwide Series entries next season." He declined to comment on reports that Algaier has been given permission to look elsewhere, but called him, “A great young driver who we would like to keep in our organization.”

Gibson said Verizon has had "issues surrounding their ability to activate the sponsorship in light of Sprint’s involvement in the sport. Verizon has been hindered in what they can do," he said. "They can’t do much (at the tracks) and they can’t do anything with Sprint Cup Series drivers, which is difficult.

"They’ve been very creative in what they have done, and they would like to do more. It’s not the perfect world they’d like to play in, but Sprint obviously does a lot for the sport, so it is what it is."
Posted by Dave Moody at 2:15 PM