Scott To Drive For RAB Racing In Kansas 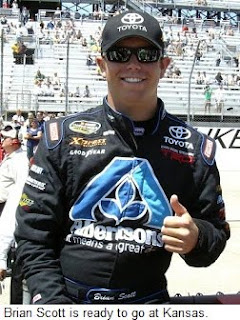 Sirius NASCAR Radio's Sirius Speedway with Dave Moody has learned that Brian Scott will be back in action this weekend in the NASCAR Nationwide Series “Kansas Lottery 300” at Kansas Speedway, driving the #09 Ford for RAB Racing.

Scott was released by Braun Racing earlier this week after the team’s sale to Turner Motorsports, but the Raybestos Rookie leader said he was confident that he would be able to find another ride for the remainder of the season.

Scott was unavailable for comment earlier today, but RAB Racing owner Robby Benton confirmed that Scott will drive the #09 car this weekend, with sponsorship from Shore Lodge. "It all came together very fast," said Benton. "The guys in the shop pulled an all-nighter last night to get a car ready to take to Kansas, and we are hoping to have a good race with Brian. We've seen what he can do over the last couple of years, and we're happy to be able to help in in his pursuit of the Raybestos Rookie crown. That would be a nice bullet-point on our resume, as well."
Posted by Dave Moody at 2:22 PM