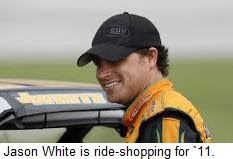 White has driven for the GunBroker.com team since 2009, when GunBroker’s Dwayne Gaulding took the online firearms dealer from sponsor to team owner, purchasing trucks from the former Bobby Hamilton Racing-Virginia team and forging an engine deal with Joey Arrington. The team formed a partnership with SS Green Light Racing for 2010, campaigning in Ford, Chevrolet, Dodge and Toyota livery at various times en route to a 10th place finish in the championship standings. The team recorded three Top-5 and seven Top-10 finishes this season, highlighted by a pole position and a fourth-place finish in the season opener at Daytona International Speedway.

“I’m close to doing a deal for next year, but nothing’s finalized yet,” said White. “There are a lot of opportunities out there and I want to make the best decision possible. We may do the same deal next year, or we may do something different.

“We’re trying really hard to make a decision on a manufacturer,” he said. ”We ended up trying them all out last season to see what was best, but I want to go full bore with a single manufacturer next year. I’ve talking to a lot of people, and I’m willing to talk to anyone who’s interested in talking to me.”
Posted by Dave Moody at 2:52 PM